Use Jupyter with Fusion SQL

This guide provides basic setup steps for connecting to Fusion SQL in a Jupyter notebook, then shows examples of how to query and visualize result sets and statistical functions from Fusion SQL. The full scope of Fusion SQL query capabilities is covered in Querying Fusion SQL.

The fusionsql Python extension is used to issue commands and SQL queries to Fusion SQL.

The show tables command can be used to list the available tables:

The describe tablename command can be used list the columns and data types in a table:

SQL is used to query the data in the tables. All SQL queries return a Pandas dataframe. If the result set is not set to a variable it is displayed in the notebook. The example below shows a SQL query and output:

Basic select queries that do not include an order by return a random sample that matches the result set. Fusion SQL has very fast and scalable sampling capabilities. Sampled result sets can be set to variables which are Pandas dataframes. The result sets can be manipulated and visualized through standard dataframe functions.

This result set also contains a categorical field called species_s. We can change the orientation of the dataframe so that we can do a boxplot of the petal_length_d field by the species_s field. The dataframe has a pivot function which can change the orientation of the result set so that the values in the species_s field become the column headers of the dataframe. Below is an example of how to use the pivot function: 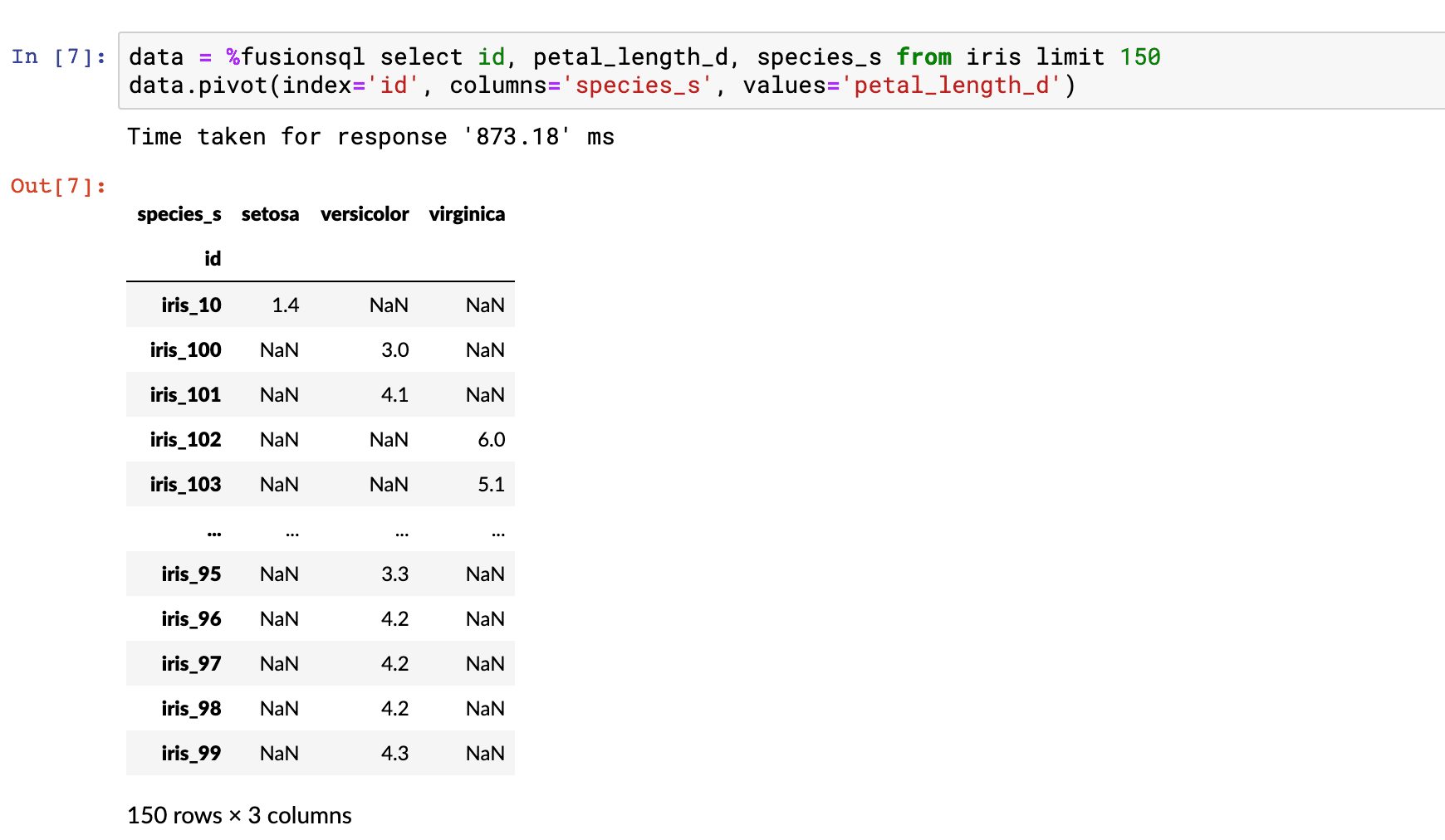 Notice that we now have a matrix with the species_s field as column headers. Each row in the table only has petal_length_d data populated for one of the species_s types.

The boxplot function conveniently ignores the NaN values to create a boxplot for each species_s column. 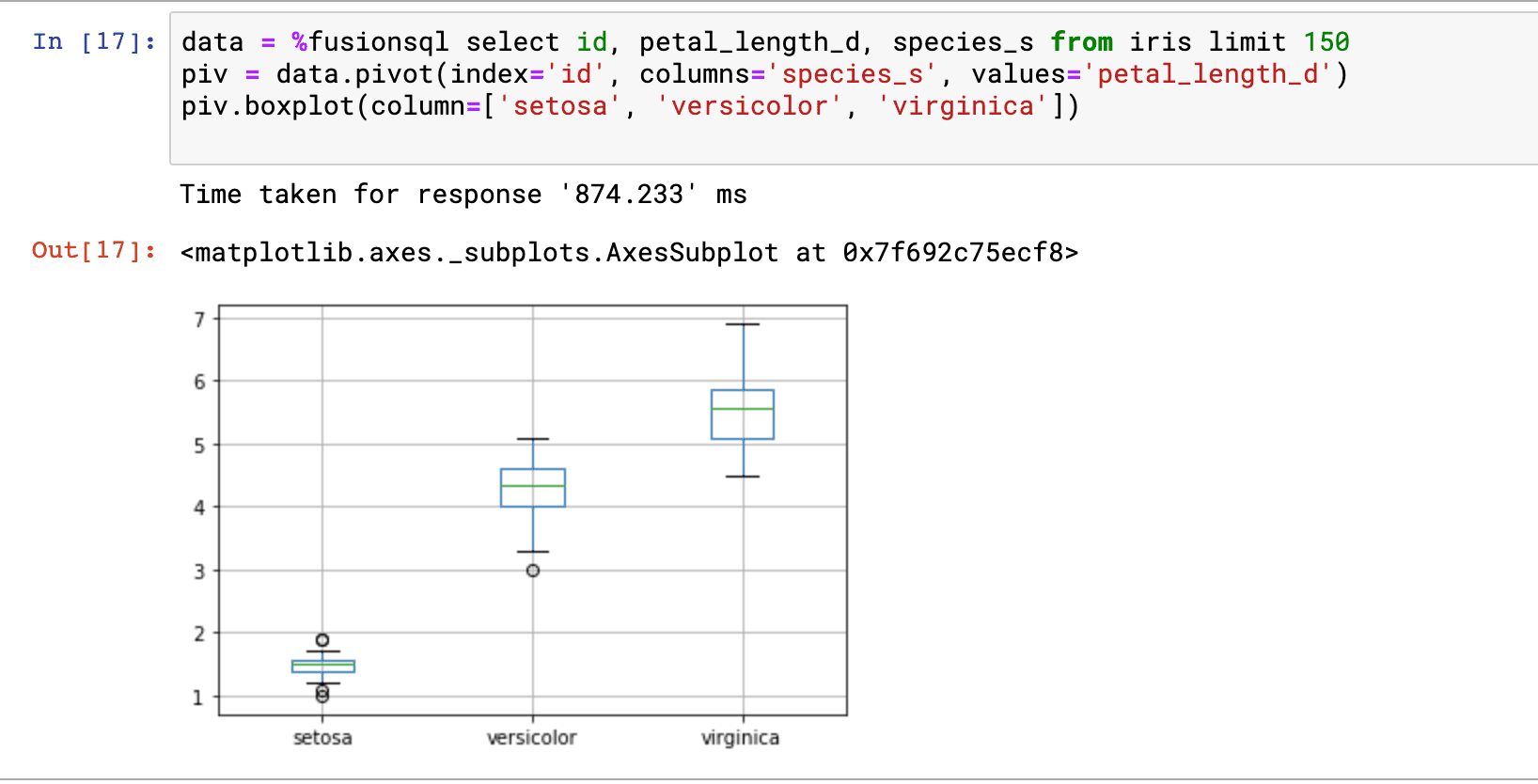 Samples can also be used to visualize the relationship between two numeric fields. The example below takes a sample and sets it to a dataframe. The dataframe plot function is then used to plot a scatter plot with petal_length_d on the x-axis and petal_width_d on the y-axis. From this plot we can quickly see how petal_length affects petal_width.

We can also add the species_s label to the visualization and color the points by species. This allows us to see the relationship between the two variables by species.

In order to add colored labels we’ll use the Seaborn Python package. In the example below the Seaborn package is imported and then the lmplot function is used to plot the labeled and colored scatter plot. 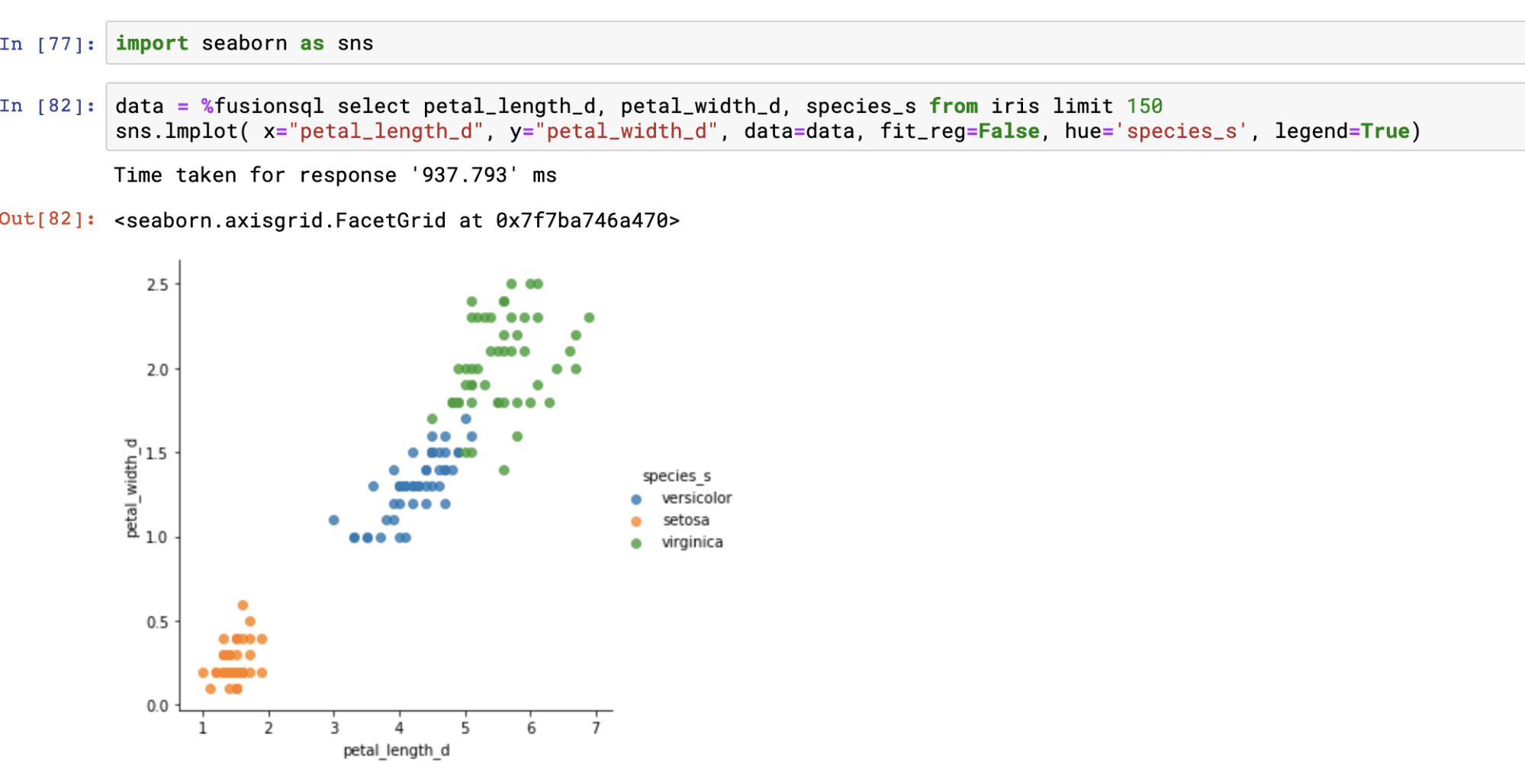 Descriptive statistics for a result set can be calculated using standard SQL.

Single and multi-dimensional aggregations can be calculated using GROUP BY SQL queries.

The result of aggregations can be set to a Pandas dataframe and visualized:

The example below shows the output of a GROUP BY query over the date_format function. 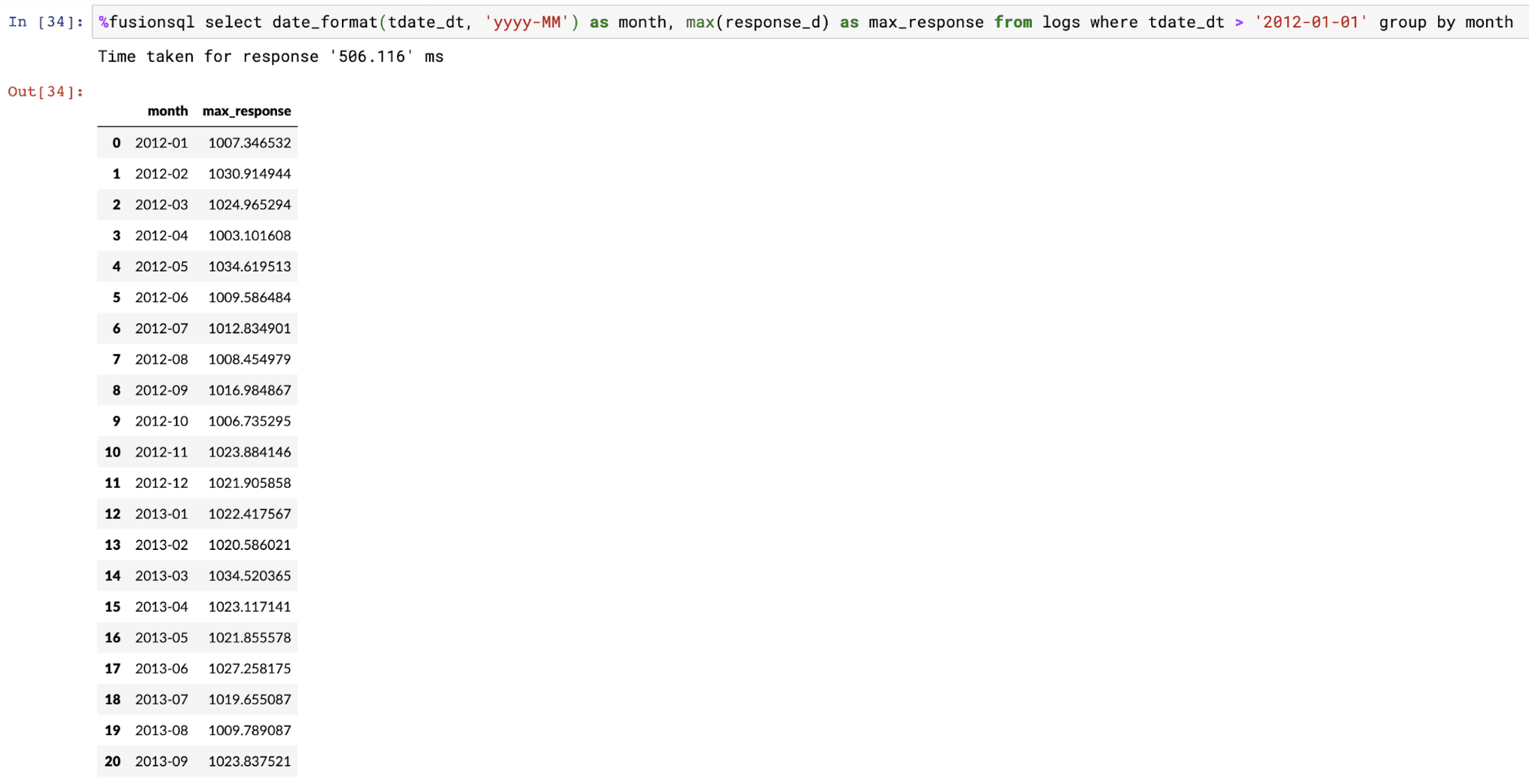 The example below shows the time series result set plotted on a line chart using the dataframe plot function.

Fusion SQL includes a library of functions designed for statistical analysis and visualization. The section below demonstrates a subset of these functions within Jupyter notebook.

Below is an example of the hist function visualized in an area chart with the hist_mean on the x-axis and the hist_count on the y-axis:

Below is an example with hist_cum_prob plotted on the y-axis:

Fitting a gaussian curve to a histogram

The gaussfit function fits a gaussian curve to a histogram. You would do this to visualize how well the data in a numeric field fits a normal distribution.

Below is an example of the percentiles function plotted on a line chart:

The corr_matrix function returns the Pearson’s correlation coefficient for each combination of the fields. The matrix_x and matrix_y fields contain the x and y labels of the matrix.

The example below shows the output of the corr_matrix function:

The dataframe created by the corr_matrix function can be pivoted into a matrix using the pivot function:

Once pivoted, the Matplotlib pcolor function can be used to display the correlation matrix as a heat map. Below is an example of how to visualize the the corr_matrix function:

The linearfit function returns the predicted value for each of the predictor values. There are also three other fields which can be selected in the result set:

Using predicted values and the residual values the regression and residual plots can be visualized.

Below is an example of a regression plot using the polyfit function with a 5 degree polynomial. The only difference in the plotting technique from linearfit is that the predictions are plotted with a scatter plot. See linearfit for more details on regression plots.

Please turn off your adblocker to leave feedback.

Was this page helpful?