Version 4.1
How To
Documentation
Learn More

The Fusion platform is designed to support enterprise search applications at any scale. You can deploy Fusion across multiple nodes in order to store large amounts of data or to achieve high processing throughput or both.

Fusion consists of a number of Java processes that run in JVMs, including the api, connectors-classic, connectors-rpc, and admin-ui processes, and possibly others such as spark-master and spark-worker. When you start Fusion, the processes that start are listed. You might also see zookeeper and solr processes, depending on the cluster arrangement.

You can deploy Fusion across multiple nodes in a Fusion cluster and use a ZooKeeper cluster as the centralized, synchronized store for both application configurations and user data.

Regarding Solr, if you already have SolrCloud clusters managing your data, you can integrate them into a Fusion deployment.

To satisfy processing requirements, install Fusion, ZooKeeper, and Solr on specific nodes. These are the possibilities:

In this cluster arrangement, a ZooKeeper cluster runs on the same nodes that run core Fusion services and Solr.

Here are installation instructions for Unix and Windows.

In this cluster arrangement, the ZooKeeper cluster runs on nodes in the Fusion cluster on which core Fusion services and Solr are not running. 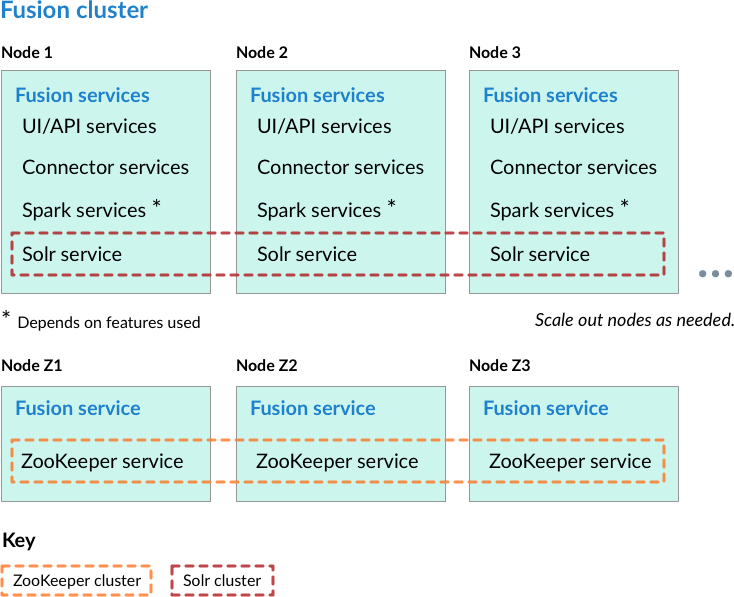 Here are installation instructions for Unix and Windows.